What is the intended market/use-case of Grin?

I’m a part-time asshole, but not full-time. Probably once every two months or so in short bursts.

I’m really trying to see what Grin’s niche may be. I am convinced most coins will die, being useless, so I wonder if Grin will be among the survivors, which I think would be more likely with coins that have a unique niche. The average Joe doesn’t care about the coolness of the algorithm or whatever. If you don’t reach the average Joe, then, by definition, you don’t have wide adoption, i.e. one’s coin is not a success.

Grin’s strongest suit, MimbleWimble and privacy, is also it’s greatest weakness, no trackable transactions or addresses, which makes purchases at online stores rather difficult. Even if you could make it work, bitcoin or etherium would work right now for your online store, no adjustment. So, obviously, Grin must look elsewhere for his niche.

I’m not sure if it was tromps or igno, but the flat rate was a lazy attempt to stomp down on speculation, as a degenerate specultor it a isn’t going to work at all and b kinda a dick move.

I wouldn’t say it was a lazy attempt, I would argue it was a logical choice. Grin wants to become the global P2P currency that Bitcoin isn’t. If you were aware of Bitcoin + all the other similar XYZ coins with capped emissions and wanted to conduct a new experiment into creating global P2P sound money- Then using a constant/ infinite emission becomes a much more logical choice - We are so early in the days of “cryptoeconomics” that no one really knows if a Bitcoin-style emission is ‘best’ suited for a currency that’s trying to become the ‘best’ medium of exchange. Over time the flat emission ends up being more akin to the fed target inflation rate of 2%. So the end result of Grin’s flat emission is a currency more akin to traditional fiat vs Bitcoin. Eventually, you also end up with an emission rate that becomes a lot closer to Gold than Bitcoin. The flat/ constant emission also gives Grin more predictability, which could end up being the most important factor.

no one really knows if a Bitcoin-style emission is ‘best’

I wouldn’t use best; but its very much a hard to believe its success was an accident with even a slight amount of context.

I was calling bitcoin “another liberty dollar” until it survived mtgox. Wanting a new currency is not a new idea, the tech didn’t pop up from the ether, bitcoin has already wildly succeeded.

The decisions that went into making bitcoin were fantastic, if a little silly now that we have a little hindsight. Other wise it would have disappeared without an once of public attention like others before it.

Bitcoin has had lots of success, more than anyone could have realisticity envisioned.

i agree this answer, the good one.

I’m not convinced by the standard 3 factors of money theory; its a prospective, a vast simplification and all this theory breaks down once you realize the currencies do not exist in a vacuum but very complex networks, usd was directly tied to the gold market by law and before that was completely broken you had chains of currencies based on usd, not to mention the taxation theory of money; and what the hell does it mean for a coin to be independently a unit of account, medium of exchange or store of value in a world where ln’s are planed to be mulicoin and the connections between coins are likely to be more complicated then usd and euro. Together the top currencies create a system, and everything after bitcoin raises and falls with bitcoin.

If you think that there will be a “unit of exchange” coin I think your super wrong; it would be like talking about usd without the newyork stock exchange or the massive banking system that ties ownership of any large object into complex legalese ownership and the various back bones of the american economy that mostly go unseen like the insane train network; usd is not a “unit of account” its a tiny slice of wonky ownership in the north american machine; likewise any coin, will likewise be a slice of ownership in the wonky clusterfuck thats being built.

It’s the truth that Grin has no trackable transactions or addresses which makes purchases at online stores rather difficult, but i think that adding a tagged transaction or address would be useful

Why do you think you can’t verify transactions in MimbleWimble?

Basically, MimbleWimble is like cash and the private keys are like hands that pass the cash. The banker-in-the-sky, the blockchain, only verifies that all cash passes were done in a way that no cash was passed that wasn’t held, and no cash received that wasn’t passed. It doesn’t track who passed what to who or how much. That’s how it’s private (because there is no record of amounts or identities stored on a public blockchain). And how it scales (because it doesn’t have to store all that information).

An https listener can receive, but that’s just putting your hand on a server to be able to always receive passed cash, it doesn’t change the protocol or tell you anything about the sender, the purchaser of goods.

And you can arrange your purchase through email and your attached transaction file when processed proves you paid, but then why use a complicated, private currency if you’re going to do that anyway. Might as well use your credit card and get purchase protection.

Also, Monero is not as private as it seems. Both the mixins and the stealth addresses can be traced. There was an academic paper on this in 2016, and the code revisions in 2017 didn’t actually address the liabilities supposedly. MimbleWimble is truly private: you can’t trace or hack what simply isn’t there. However, there’s the rub, how does a merchant even know a Grin payment was made? The only way is key exchange, blah blah blah that defeats the point of a private coin. And again, use any top ten coin for merchant purchases only. There’s probably a cool mobile wallet for it already, and a payment portal. 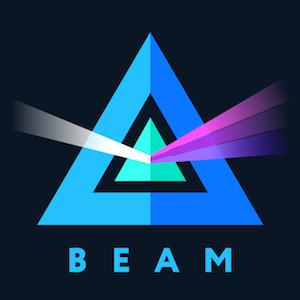 
Beam has an Opti-in audibility feature.

You could produce another rangeproof to prove you own an output
There is some discussion on this here Re Grin: https://github.com/mimblewimble/grin/issues/2336

Re Beam, to paraphrase Vitalik Buterin, it seems like a “centralized pile of trash.”

Tromp’s comment on that thread is interesting: “Yes, proofs of past ownership are not convincing, so proofs of ownership should apply to unspent outputs.”

Thank you for your response. Since you have already contradicted your claim that Mimblewimble txs can never be used for an online store in your second sentence maybe you have realized that of course transactions can be verified in Mimblewimble. As long as it is proved that no new coins were created and the two parties to the exchange can prove that they are the owners of their keys then the transaction is verified by definition. With respect to Bitcoin, its design makes it more amenable to being a store of value so you wouldn’t use it to buy stuff in the same way people don’t use gold to buy stuff anymore. Litecoin’s payment protocol - Litepay - has already been canned so that answers that. I think we have already dealt with the mattress protocol.

All that is not to say Grin will be the most successful cryptocurrency in perpetuity but I don’t remember that claim being made or that that was part of your original question. You asked about use cases and versus other coins. As an example, one advantage that Grin has over other coins is the speed at which transactions can be processed because its use is computationally lighter than many other transaction protocols. It is a combination of factors - this, the privacy it affords among other things that probably make people enthusiastic about its potential.

I think the shining point of Grin is the property of MimbleWimble:

Although Zcash and Monero already have very good privacy, their transaction size is much bigger than normal Bitcoin transaction, it’s not scalable. The blockchain of Bitcoin already takes 200+GB now, which is already very big and will grow bigger and bigger.

Ethereum is already suffering from the problem that there are too few archive nodes which store all transaction data, about 2TB. If Bitcoin’s size grow to the same size, it will face the same problem.

However MimbleWimble’s node doesn’t need to store all history transaction, even 100 years later, the full node only needs to store <200GB transaction data.

Imagine that we can combine across blocks (perhaps with some glue data) so that when the outputs are created and destroyed, it is the same as if they never existed.
https://scalingbitcoin.org/papers/mimblewimble.txt

However MimbleWimble’s node doesn’t need to store all history transaction, even 100 years later, the full node only needs to store <200GB transaction data.

MW’s long term storage requirements are about 1/3 that of Bitcoin. Instead of storing a bitcoin tx of around 300 bytes, it needs to store a kernel of around 100 bytes. At 10 tx/s that amounts to nearly 30 GB per year.

Thank you for correction.

Actually, inflation rate of Bitcoin and Grin don’t have big difference in the long run 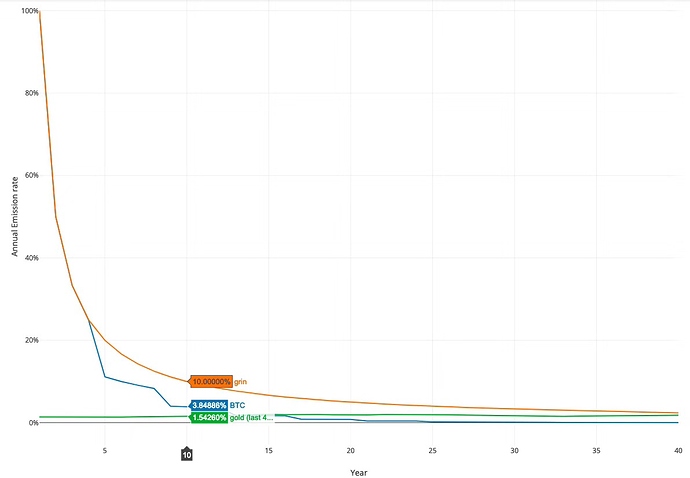 Agreed, and the emission of bitcoin in the early days was 50 BTC ~every 10 minutes! So early on bitcoin was being emitted 5x faster than grin. 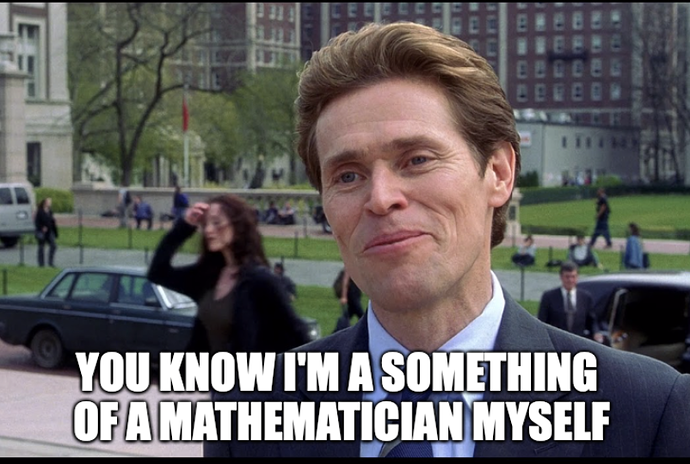 The parameter that’s important is “inflation rate”, not “emission rate”.

Cool, I see, thanks!

So early on bitcoin was being emitted 5x faster than grin.

1/12 BTC per second is 12x slower than Grin.
You seem to have seconds and minutes confused…