As it stands, once purchased/landed, the machine is either taken into the buyer’s possession or hosted at a rate TBD.

Would this sub-board be the place to discuss this? Eventually, a token that is allocated a mining-power value, can be sold to expand operations. My aim is to first enter in agreement with home-hosters: retail accepting to run the miner(s) at energy costs of under 20 CHF per month, some even free since utilities may be a non-factor).

Then small hosting locations which would have 10’s of machines at minimum, and eventually a main hosting center where electricity is cheapest (under 10 cents). By this stage, larger more efficient miners could be purchased.

All could be legally run with contracts enforced via blockchain (if that can be respected…?), notaries,

Now some quick numbers (note I like to use ‘calm’ estimations / 10 months may already be a ‘long’ term for this network in terms of price/miningpower/organic coin-being-used growth).

Let’s say the supplier agrees at $260/unit. At current price that’s 0.0145[btc] equivalent. Or 4’000 grin equivalent. That means each miner would earn the equivalent in 50 weeks (ceteris paribus, again, if total network mining power remains stable through a year, which I doubt, 8-10kGps right now coming from big removals of power since a few months/2 years). The machine is ‘paid for’ in approx. 1 year (there is a part of this venture which is hinged on grin’s appreciation or success in general too).

17 units pledged to be ordered currently.

Yes we have reached out hence the waiting for reply. And yes it does need to be verified because:

-You are new to this community with no reputation
-advertising custody of others’ mining machines with fantastic electricity rates (in the middle of a global energy crisis.)
-you have said repeatedly there is no risk associated (there is.)
-Don’t have assurances of individual shipping

Even once (if) verified, it is tremendously risky for anyone to give someone money or their equipment with no guarantee for follow-through. I hope this helps see the reality.

Everyone is encouraged to wait before providing any money, And then it will be up to you if you accept the risk assumption of letting someone else custody your miner.

We are all highly skeptical extreme caution is warranted. I do not advise engaging in business with this individual at this time.

Thank you for the message @satoshocrat, and I agree: don’t trust, verify. Seeking to assure via standard transparency or even try taking trust out of the equation … for example payment: settled (in parts) by each buyer directly via invoice or a third party could make a single aggregated payment to the manufacturer.

As with hosting: concrete details will be proposed before any agreement. Currently, a few local orders and 1 telegram order are to be hosted.

Just to add re: me; crypto since 2013, there’s no going any where. Bitcointalk & now Forum.Grin will keep track of this project, which reminds me - I need to update the OP…

As it stands: no decision has been made - no money has been collected for a group-buy order. Including mine, there are 17 pledges, and confirmation from a iPollo representative that they may honor $269/unit, 25moq at last discussion. Hosting will be possible here in Switzerland (details to follow), and from my occupation I can propose monthly buybacks of up to 3, even 5 units. 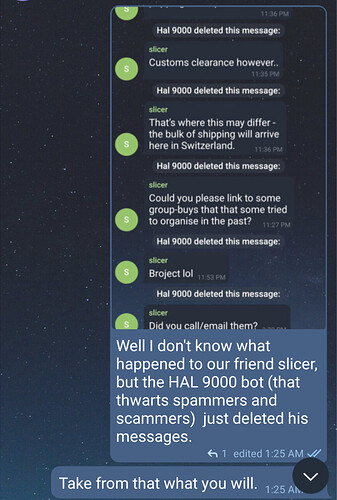 I found all of this very estrange tbh

Gathering community together and buying bulk order is an idea. But cloud mining, hosting stuff is messy. There is a counterparty risk.

Nhash send a message that they lowered price for each unit, anyone can contact personally , and negotiate as group buy but miners should be sent to owners.
And there is GRINCC page updated frequently for trusted sellers, but ALWAYS DO YOUR RESEARCH.

'Not your keys, not your coins ’
‘Not your hardware, not your G1 Mini miner’

We’re literally in the midst of recreating money, strange is an essence in this game.

GRIN, the username, was surprisingly available. My Bitcointalk signature space is simply a way to attract people’a attention to 1) the network 2) the group-buy + mining proposition.

I hope to provide a fair/stable offering here, no quick gains really. Sure, it’s simple: those interested can join - and those not interested do not join. If individual shipping can be satisfied, then it will be done. There are still a possible few weeks before this 25moq group buy would take place.

2x 2-3 G1 mini’s are set to ship out to USA within this buy. This was settled via the bitcointalk forum. Then there are approx. 10-15 local units to order (2-5 will be my order portion - not to mention my idea of ordering / buying back 2-5 units a month continuously); I am taking care of hosting this with electricity from free to 15 to 25 cents (from profit to breakeven costs).

There’s one unit from a user in EU, to be hosted, and a couple more yet to confirm. Yes, the counterparty risk is me receiving the units, running them on people’s behalf, charging a commission to eventually grow a community project, and making payments.

I encourage people looking for a unit or two to go the nhash sale route, $279 delivered is a good deal.

Otherwise, a little wait, and we have a lower price from iPollo - though delivered to Switzerland/USA.

Group buy is currently at 21 units of 25 needed.

Could you please update the forum on your verification attempt(s)? iPollo sales-rep contact details were provided around 3 weeks ago. Perhaps @ipollosales could chime in too?