Anybody getting better gps? What miner and pool should I be trying, and why? Thanks!

can you share how you overclocked? Windows? Linux, tks…

Results from this rig: 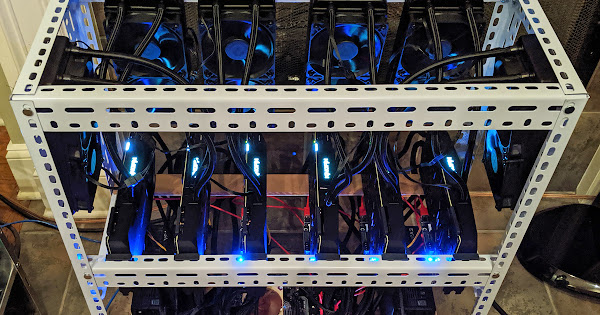 Wow, the temperature is really good, do you have an air conditioner?

Are those power figures accurate? I thought TDP for 2080ti is 250w?

The manufacturer claims these are capable of over 520W per card (assuming 100% or greater power limit + 100% load) because each card is powered by 3 (three) 8-pins.

Anybody getting better gps?

You asked if someone was getting better gps using 2080 Ti on c31 and I obliged. I can’t recommend the cards I’m using if one’s primary concern was being economical & frugal, but if you want the highest gps and most coins, then there’s no better option.

In regards to the question in your thread title, the best performing for memory intensive c31 should be the 24GB Titan RTX, if best is based on hash/watt with cost of hardware not being a concern.

What miner and pool should I be trying, and why?

Currently, that would be Gminer, if you want the highest hash and stability on both c29 and c31.

Grinmint is the community’s pool of choice.

Got it. In hindsight it was a bad question; higher gps isn’t necessarily better if it takes 2x the power.

Have you tried optimizing your power to see how low you can go without sacrificing hash? I wonder if you get the same at, say, 200W? or is there something inherent with Gminer that requires that much power compared to Bminer? Are there any studies/comparisons with real data that show that Gminer is better than Bminer, other than anecdotal?

Sure, I could just say I’m getting about 2.6 gps @ 190W, or I could provide quasi-proof, by capturing at the most favorable hash/watt fluctuation (lets be real, power use can fluctuate by 50W+/card with hash remaining relatively unchanged). Regardless, our goals are very different; I prefer more coins. I’m not cutting corners on any of the hardware, nor am I cutting corners on optimizing for best hash while remaining stable, especially not during winter, when our rigs can be pushed harder yet remain cooler.

How do I know that Gminer is currently the best performing miner program for Grin (both c29 & c31)? From XP (experience). I fiddle with a lot of rigs/cards/configs. But don’t take my word for it, you could run Gminer and see the results for yourself. Or don’t, that’s totally your prerogative, just as lowering the power limit on my cards is mine.

yes, different goals. You prefer more coins. I prefer more profit. Thanks for the screenshots, nothing helpful there though.

So since you are focused on more coins, can you share how many coins/day you are getting from the rig you posted 2 days ago? 6 2080ti GPUs? A screenshot of THAT would be helpful.

Got it, you’re chasing the daily USD, cashing out to pay utilities perhaps (hence the penny pinching), and you’re obviously not in it for coin accumulation. I’ve been mining for years (filling bags) and have never sold anything (never cashed out) and see no reason why I would any year soon. I favor lower SAT for Grin for lower difficulty. You’d favor less coins if that meant more USD. I’m looking to the future, not so much the now.

I have everything pointed at Grinmint so my coins earned per day are the result of all cards and not just the K|NGP|Ns. However, if you take the hash from x6 2080 Ti K|NGP|N = 17.65 gps…

…then plug 17.65 into the pool’s calculator for the c31 field, you can see estimated results:

thanks, I’ve seen the calculators… however, I found that they aren’t accurate enough to base decisions on. Seems like there are a lot of variables that can affect the number of coins/day a rig can mine (perhaps the pool, the miner/OS, fidelity, etc.). There could even be error in the fidelity and hash speed that a miner displays.

The be all, end all, comparison is coins/day I guess.