GrinPro.io miner - first to get 5 gps on Vegas

Hi guys, we are happy to announce new release of GrinPro.io
(GrinPro is our modified version of GrinGoldMiner with API and some speed improvements)

GrinPro 2 beta - first to get 5 gps on Vegas
beta available at https://github.com/mozkomor/GrinProMiner/releases

Any info on graph rate of different GPUs?

We are BTC.com mining pool ，hope we can have deep cooperate with GrinPro.io

Would appreciate if there appear C31 support for Vegas…

GrinPro web monitoring and management. Contribute to mozkomor/GrinPro-Dashboard development by creating an account on GitHub. 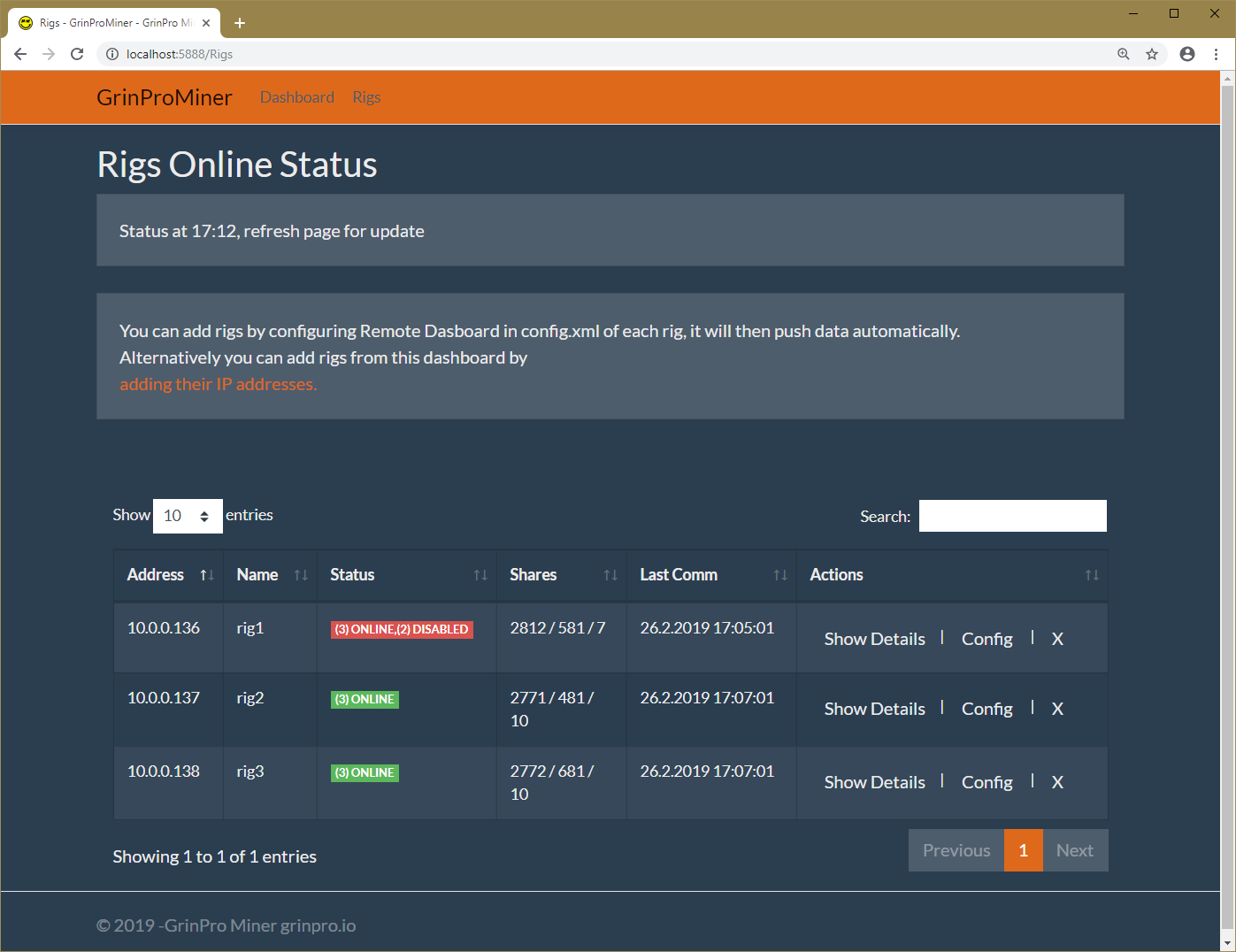 Hello to everyone so I am pretty new to all the mining and keeping up with all the algos and what not. But reading some points on this chain and skimming a lot of it.

Results in this question.
It’s stated the RTX titan or the RTX 2080Ti can or could be the best GPUs to use. So I have a system that I have started my development learning curve on that is equipped with 1 RTX titan 24gig and one 2080TI 11 gig. Sitting on a Taichi AMD threadripper motherboard and a threadripper 2970wc processor.

Does anyone have a rig similar and if so how fast is it mining the 31 algo?

Never heard of anyone mining Grin with Titan RTX, so I’m looking forward to hearing your results. You’d think that 24GB of RAM would excel on a memory intensive algo, but if no one’s writing a miner program optimized for your Titan RTX, then it may underperform.

Well I may give it a go tomorrow. And for sure I’ll post some numbers. Which miner would u suggest.

Awesome thank you sir I’ll try to remote into my rig from work and set it up. Now. I been seeing all these branches from other mining software. With my rig set up is there any special commands to send with the start command to get an optimal setting range. Understanding from your commit previous that it may not be 100% optimal due to testing. But I am a windows dev and do machine programming but haven’t got a full scope of what exactly all these extra options do in compared to hardware.

and to be honest i jsut really looked at that pic, are those values for the 3 cards u have or per card?.. and is that awesome miner the UI your using

Good pool choice of Grinmint. Your 2.6 gps must be be from your Titan RTX, that’s a new record from a single GPU, very nice! You can probably squeeze out more by overclocking, if you haven’t already. Say +150 core + 600 memory, then adjust down from there until stable.

Yes, I use Awesome Miner for the management system. And the 2.4 gps is per 2080 Ti card, but I’m using high-end 2080 Ti’s, not all are created equal. My latest rig build uses Kingpins.

Yea I was looking at those king pins. They are insane. My 2080TI is just an gamers edition it says OC.

But your correct that hash rate is just out of the box. Now I am currently trying to pick up the GPU programming. But I am sure since. The titan is so close to the 2080 the miner is probably restricted to the 11 gig of ram like in the 2080 cause I would
think taking in consideration of the clock speeds and cores the titan has over the 2080 I think it would be around 50% more then the 2080. I’ll have to see if I can’t get into the source of the miner and adjust a tad.

Now I also have to ask you man. And if it’s considered rude. Then tell me to piss off lol. All those miners in the pic u sent. Are those single cards. Or do u just have a crap load of 2080ti. Cause if we only getting less then 3 per card. That’s an insane
amount of 2080s and I guess we can all thank u for the bump in Nvidia stock lol

Also the review I watched on those kingpins. U may as well have titans. Those come clocked out the world. And to be honest I should have done more research before I dropped what I did on the titan.

However my reasoning is the ram on it. I also bought a Xilinx FPGA v7 board that doesn’t come with a lot of built in ram. So I got a GPU with more then anyone would want lol. But there is a 32 gig version titan as well lol.

You can also try Bminer with your Titan RTX, maybe they optimized better for > 11 GB cards. And for c29, I must correct, Gminer is currently the best performing.

Another reason I chose Kingpins is because my farm is mostly Hybrids (water-cooled) because I don’t have an exhaust system yet and must operate in high ambient heat at the peak of summer. Tho I’ve received quotes and will have exhaust installed before 2020 summer is the plan.

Ya, I’ve seen the 32GB Titan V CEO pop up on eBay before, but just couldn’t justify it for mining. Seems Titans aren’t best value for mining, not because they aren’t superior hardware, but because they are so niche that coders aren’t optimizing for them.

ok this appears to be the highest i can get with the NBminer, ill try the Gminer a bit later.

and your right about the titan, its mainly only use is for graphics in the industry, i do industrial robotics so i program interfaces between real machines. when i built this rig i went for the dev machine with the mining off set lol. I have one GPU miner with 6 GTX 1660 TIs and a AMD rig with 3, 580s and a vega.

Awesome Miner is miscalculating for Grin earnings, maybe not AM’s fault, but the coin-stats provider it pulls from is wrong, seems to be based on $3/grin. That’s just an estimate anyways, actual earnings are how many coins you earn poolside:

Ok I was wondering about the amount lol. Cause doing the math in my head after hashing this titan. Lol I told my wife that you had to have 1-1.5 mill just in GPUs lol. Still blows my mind the amount of currency that is filtered from day to day in this market. I mean when I jumped in I went head first. But it’s only been about 4 months and still only got my toes wet.

What has my attention is the FPGAs cause I know machine talk lol. And that’s all they know but I am kinda a fanatic at times. Cause when I start something I have to know how it all works lol. So I built 2 small gpu miners and this PC that over kills any workstation that one would want lol. And I keep telling my self. Well it it all goes belly up I’ll have some bad ass gaming machines lol.

Here is the config and error we are getting:

We receive this error: