Anything I should be careful of when removing the warranty sticker screws to fix one of my fans that has an annoying rattle to it? Like wires getting pulled apart on first disassemble or something? I think the warranty is nearing its end in a few months anyway - had contacted ipollo about it but haven’t heard back in a while.

Has anyone ever repasted the thermal padding / paste with results? Would be cool to lower than fan speed a little after thermal contact improvements, even if it’s an automated curve based on temps

There is a disassemble video for g1mini. Hope it helps. 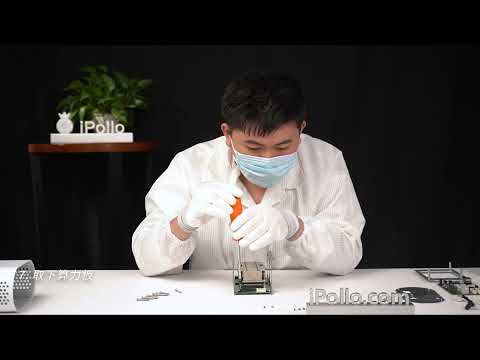 Ipollo uses thermal pads in their G1 mini (at least it is true for late 2021 batch).
My two units are liquid cooled and thermal pads are much better option in such environment (paste gets washed out over time).
Fun fact: the fans’ RPM reading on miner’s dashboard is fake. I have all the fans removed form my miners as the oil convection alone is enough to remove heat from heatsinks, but on the dashboard I have readings around 4000rpm and changing in real time.

Looks pretty straightforward. I have some nice pads so maybe they will help a little, that heatsink looks kind of small though lol. Might just fix the fan rattle and leave it alone.

Your water cooled setup, is it self contained or is the radiator on the outside? Does the factory heatsink make thermal contact with the core as well as memory modules around it? Wondering what you used to get the water cooling to work effectively.

They didn’t remove the heatsink from the chip itself (as far as I could tell) in the video.

Lmk if your fan rattle truly is fixed. I have the same issue, and might follow in your steps

I use a transformer oil as coolant (see the link below to the post with my setup)
immersion cooled mining
It’s been almost one year now since the start and still working great.

Can anyone please tell/link me what replacement fan to buy to repair the G1-mini? I bought a batch on eBay and a couple units have some internal fans that are failing or have failed. Running ~20C hotter than the other units and bios shows fan speed warnings.