What happened to the dip - Grin whales at work?

Am I the only one suprised how everything dumps today but Grin is bouncing directly up again?
Perhaps there are some ‘benevolant whales’ at work

, or the market finally realised the true value of Grin

?
I will make a better version of this meme later. 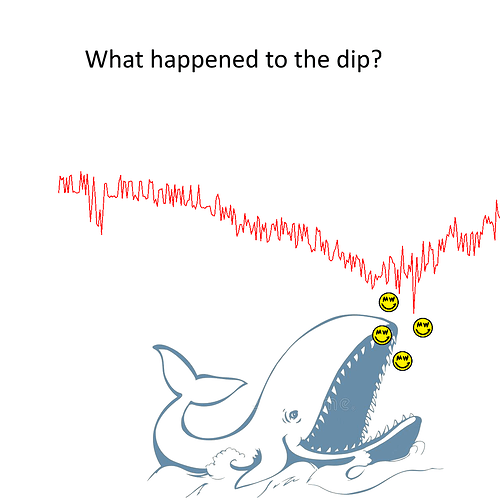 Yeah it’s interesting. I think it reflects the dominance of the USDT pairs.

Seems like maybe 80-90% of volume is against USDT so BTC just doesn’t naturally pull a lot of weight against grin. I don’t know if that ratio is unusually high for an altcoin.

It might also be that Grin is just a bit harder to manipulate into a crash, compared to other coins.
I mean mosts Altcoins mooned and then crash slowly, panic sellers are easily tricked into selling with a sharp dump like this.
Grin has been dumping for quite a while and has less people FOMO in that can be manipulated to sell. Panic sellers have been weeded out already in Grin. Most of us holding Grin are into Grin for its fundamentals, no hair on my head would ever consider selling Grin no matter what kind of ‘scary’ dumpy trajectory is drawn on the charts. Grin’s true value has nothing to do with any numerical value. Even if it would touch 0, it would be worth infinite.

Maybe I should mention that I work with the assumption that crypto markets are 90% manipulated. So I just assume every crash is planned just like every bull-market is planned. I guess, the doomsday whales did not have enough Grin in reserve, the benevolent whales overruled their attempts to make Grin dump.

Maybe grin is just so small now when the market crashes it forgets to bring us with it.

Yeah, this little project is floating aimlessly through the darkness. 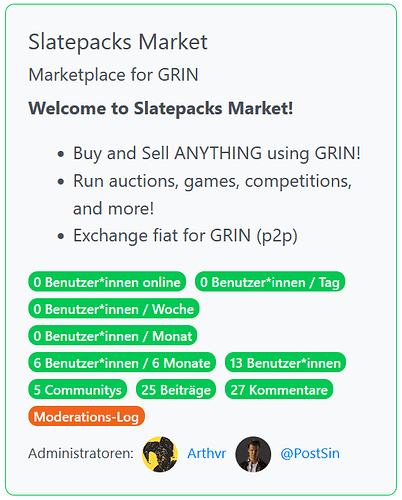 This is pretty cool. A web game from @harry.potter. also great grab for the domain slatepacks.com

Hi, I’m known on the grin forums as harry.potter. …

Yep, the potential is there with slatepack market. With market places, success builds success. Meaning if there are enough people selling and buying it becomes interesting enough to attract others, both customers and sellers.
I visited a few times, but since there was not much activity in the last couple of months, I simply forgot after a while to keep checking it

It think I am not the only one.

Still wants some nice goodies from CryptoDrip though once I have some more spending space.

It would be nice to see some retail apparel on slatepacks.com something to replace the defunct TMgox I think would please a large set of people and attract future use imo

Theoretically, grin should have collapsed… However, we are standing decent despite the fall…Halfstable coin in practice @tromp