The estimated date would be around May 2023. The workshop would be given by @marekyggdrasil and would cover different topics based on Mimblewimble and Grin. Following the workshop, there will be a hackathon of two nights and 3 days (Friday to Sunday) where students will be able to put into practice what they have learned. In total, 7 days of pure MW/Grin.

My suggestion for the hackathon would be to take one or two of the current rewards for the teams to complete. Another option could be to contribute to the implementation being written in Python, or to solve an issue in the repository of the Rust implementation. Some extra would be to take an RFC such as early-payment-proofs, and someone could write a PoC and an analysis of it. I don’t know, I’m just venting ideas.

Personally, I don’t see any reason not to sponsor the event, but I would like to hear your opinion.

Events like this are good for the grin. I wonder how many participants are we talking about?!

For the Hackaton around 20 people, but for the workshop many more.

I think these workshops where people come together to discuss, improve and use grin might be a great path forward for this project.
The recent events are proof that large parts of the cryptocurrency landscape are scam infested.
Since some months Grin is the only Cryptocurrency I own. I am open about it that this is connected to the fact that grin is also the only project I followed because it is the only project that has been constantly in the red for me. But it never felt like a waste of money. I am still optimistic that Grin has its place in this world, maybe it’s just that its place is NOT the current crooked cryptospace.
I think it is for a reason that grin is passionately being hated by some parts of the community since it’s the best competitor to Bitcoin, which is being held by most participants.

What can Grin do for it’s user? It’s basically minable on your own, as I understand it. So you can potentially transforn current into coins. This is something Bitcoin cannot offer for average Joe anymore. This makes the single user on some basis detached of the crooked cryptospace. He does not need it since he can make his own grin, right? Nobody could prevent someone mining grin at home, since the miner is just another hairdryer with a network capable chipset.

Isn’t this a direction it is worthwile investigating? Maybe I’m just insane.
But I know for sure that I would love to have the ability to interact with another user I personally know without any crooked cryptospace in between. I would absolutely love getting rid of my Jared Leto Drawing without having it documented in some way the public can trace that I sold it and for what amount.

Generate your own grin, build a community doing the same, get rid of the annoying scammers…a truly peer 2 peer network that only relies on the great work done by our few devs. Grin would suit perfectly for this purpose since it’s so lite weight and fits into almost any smartphone.

We need many more hackathons and meetings, it could be the best path for Grin

This is something Bitcoin cannot offer for average Joe anymore 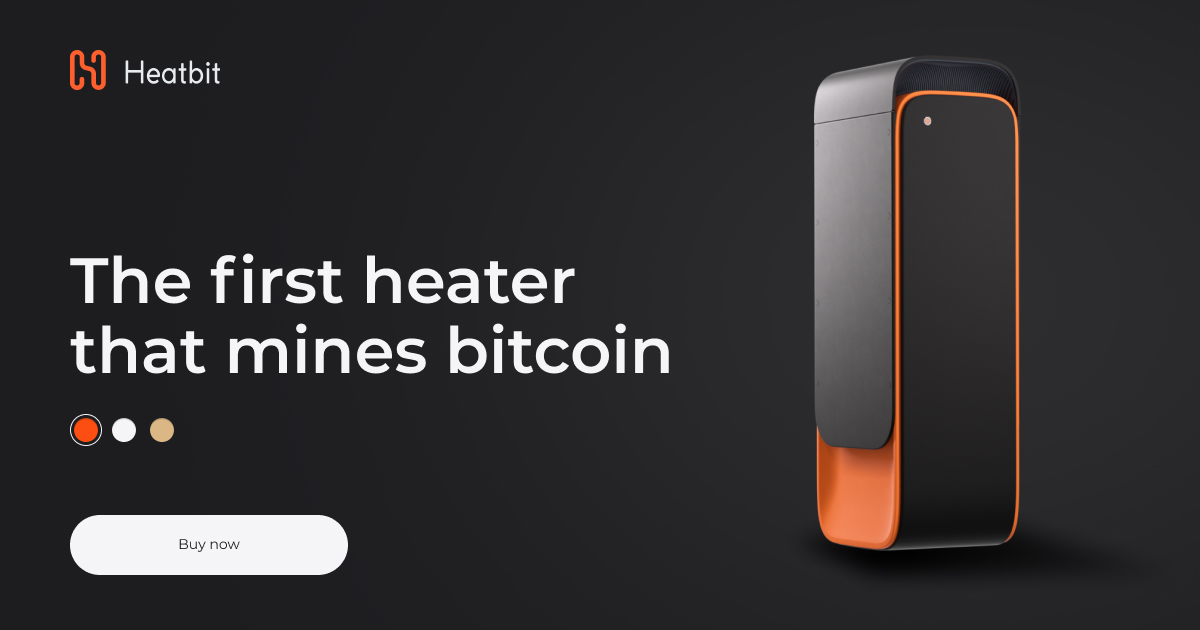 The first heater that mines bitcoin

Plug in the first user-friendly way to decentralize and mine Bitcoin while quietly warming a room.

seems to be appealing to average heat-deprived Joes…

Generate your own grin, build a community doing the same, get rid of the annoying scammers…a truly peer 2 peer network that only relies on the great work done by our few devs. Grin would suit perfectly for this purpose since it’s so lite weight and fits into almost any smartphone.

You’re getting it right

Perfect! we lack such activities. I’m talking about the Russian community. but we will try to take an example.

this is very useful.

We support and believe.
I am very sorry that we did not contribute to the coding.
But I’m willing to be there to line up chairs, hand out tea, and even wipe the floors.
This is no longer about making money.
To be on the side of universal truth and good, it is necessary to act like a knight.

Edit: I misread it first. I see this is much further in the future so it’s natural the details are unclear.

I like this idea. Python is more user friendly than Rust imo.

David, it’s great to see you in Turkey. I would like to meet you at the next meeting. This community needs brave people like you!

I would go one step further here and say, we would need to have more people contribute and help plan all the content, coding challenges etc.

Sincerely, I would like to read your opinion on the MW concepts that could fit in a 5 days workshop, as well as @tromp’s and @vegycslol’s. IMO the workshop is the main thing.

David, it’s great to see you in Turkey. I would like to meet you at the next meeting. This community needs brave people like you!

Thank you, Istanbul was amazing, we also had great hosts. If I could choose a country that I thought would be a catapult for Grin, I would say Türkiye. Walking through the markets and bazaars and seeing a crypto exchange everywhere definitely fills one with optimism. Anyone can come in and buy cryptocurrencies, the potential of a cryptocurrency-based economy is right there in front of our eyes. It’s pure beauty.

I would like to publicly acknowledge that all the credit goes to @renzokuken, we’re having this conversation because of him and his efforts to reach more people from the crypto ecosystem.

While in Istanbul we discussed it in person between me, @davidtavarez, @Cobragrin and @stakerV and this is a summary of how I remember it:

Workshop:
Day 1: Introduction to elliptic curve cryptography and basic tools needed
Day 2: build super simple blockchain in Python with mining, participants would form a network in the room and could mine and send each other coins they just made
Day 3: Add memory efficient mining algorithm Cuckoo Cycle, explain the advantages
Day 4: Bulletproofs / rangeproofs / introduction to zero-knowledge
Day 5: Confidential transactions / Mimblewimble - the blockchain built earlier becomes private, external observers can no longer trace the amounts and addresses of senders and receivers

Hackathon:
Those who wish to join the weekend hackathon are given project, requirements and are split into teams with assigned tasks

At the end of hackathon the result is announced. If successful everyone gets the prize. If not everyone gets some gifts and cheer-up prize and offer to continue working on it remotely, those who commit and want to spend more time and finish will get the prize.

We want prize to be something rewarding, like some BTC, something to really compensate time and efforts.

MW concepts that could fit in a 5 days workshop

Elliptic curves are a must, as are Pedersen commitments and Schnorr signatures. I would include the concepts of completeness, soundness,
and zero knowledge properties, and how to prove these for Schnorr sigs.

Then one would extend this to 2-of-2 sigs, as used between sender and receiver, and discuss the tx flows including the concept of kernel offset.

Bulletproofs are a bit too ambitious I think, unless you stick to the high-level ideas.

Non-MW but Grin specific topics of interest include MMRs, Cuck(at)oo Cycle, and the different kernel types.

Thank you for you input. Really glad to have it.

Bulletproofs are a bit too ambitious I think, unless you stick to the high-level ideas.

Perhaps they could be provided with just a library to import and ready to use? Maybe there is not enough time to fully explain it, but at least explain what it does and how to apply it.

I think a Hackaton for Grin would be great for so many reasons:

To give an example of a potential project, which I also gave in the last CC meeting:

Grin coupons:
A Slatepack like messages, or JSON (should match the transaction wrapper proposed by @vegycslol) that contains the mnemonic/its-entropy of a wallet containing funds. The state it is a mnemonic/entropy, which upon importing as text or QR code will be recognized as a Grin voucher. The mnemonic/entropy will be used to create a temporary wallet of which the funds will be directly send/imported to the main wallet.
Essentially what this would add to the project would be

**Added benefit, since the transaction took place when creating the voucher, there is no locked funds problem.
**Minor disadvantage, only upon importing by a wallet who confirms the transaction output is there, can the value be confirmed. Not sure if this is really a downside, it goes for all top-upp cards.

This is just one example of a project that I would like to give for the Hackaton. There are many more low hanging fruits projects that could be great for the community and are simple enough to achieve in a Hackaton. Payment processor, webplugin, anyone…transferring slatepacks over sound… so many potential cool micro projects one can think of

This is just one example I would like to give for such a workshop Hackaton. There are many more low hanging fruits that could still be great for the community. Payment processor, webplugin

I’ll assume the students don’t know what a blockchain is or has a poor understanding:

This is very roughly from the top of the head. I’d personally omit bulletproofs because rangeproof implementations are not crucial to understanding the Why’s of Grin, it’s just a specific detail. Probably best to just think of them as a black box function that allows us to construct/verify proof statements.

Day1: Introduction to the construct we call a blockchain (why it’s democratic step function for society, how we achieve an “open democracy” with energy, UTXO model, simple construction i.e. Bitcoin without going into the details like scripting etc.)

The same group of students have already held other events of the same type, for example, they recently held an event on Blockchain and the topic was Zero-Knowledge Proofs.

I think we can skipp or only very briefly discuss the basics of blockchains and UTXO’s since they have experience.