It’s been a looong time since I’ve given any Grin++ updates here, so I figure we’re a bit overdue. I have a few important announcements to make that you may be interested in.

I have finally fired our terrible UI designer! If you’re thinking to yourself, “Wait, weren’t you the UI designer?”…You would be correct. I’ve never been skilled at UI design, and it seems clear from past Grin++ versions that I suck at it, and am just never going to cut it (After all, I’m the same guy that once designed this monstrosity: https://aws1.discourse-cdn.com/standard10/uploads/grin/original/2X/8/8c90cbb0bfd31662995b2f964b1a873bef39ff18.png).

So without further ado, I would like to introduce you to the new lead UI developer for Grin++:

dtavarez (David Tavarez) is now on Keybase, an open source app for encryption and cryptography.

David has spent the past few months completely rewriting the Grin++ UI. It’s still an electron app, but all of the code was rewritten in typescript using more modern frameworks, design patterns, and even some tests (wtf are those?). With him taking over the UI tasks, I’ve had more time to focus on the node and backend wallet logic. It’s now more stable than ever, with lots of great technical improvements that none of you probably care about, so I won’t bore you with the details.

This leads us to…

Just over a year after the first hurriedly-written (aka. half-assed), windows-only, cross-your-fingers-when-you-use-it, pre-pre-pre-alpha version of Grin++ was released, we’ve finally reached a point where the code is secure, stable, reliable, and well-tested. Grin++ is no longer betaware. v1.0.0 is the first stable release of Grin++, meaning we will strive hard to ensure backward-compatibility of all APIs, database schemas, config settings, etc. in all future releases.

And just look how sexy v1.0.0 is. I’m doxxing my entire net worth and transaction history just to show you how good this app looks in the wild.

In addition to all of the great features from previous versions, v1.0.0 includes:

And there’s a whole lot more planned for the near future! (cough mobile support cough)

Some time ago, the Grin, Beam, and LTC communities all worked together to fund a security audit of the C++ codebase. As promised, the security audit took place (performed by SmartDec), and the codebase is in so much nicer shape than before.

Putting code through an audit was a completely new experience for me, so I learned a ton from it. In addition to searching for security vulnerabilities, SmartDec offered dozens of tips and guidelines for improving the stability and safety of the code, and I worked diligently to apply as many of them as possible. Once again, I’ll skip the boring technical details, but suffice it to say that a lot of good came from the audit, and I have all of you to thank for making that happen!

While the fixes for the issues found were all applied many months ago, I’m a serial procrastinator, so am just now getting around to releasing the results. My apologies for the months-long delay.

If you made it this far into this long-winded byproduct of alcoholism, then you must be reeallllyy interested in Grin++. The good news for you is we have a new, improved website where you can read all about it! Once again, @davidtavarez is the badass who created it. Everyone should thank him for his hard work by buying him a beer or 10.

In theory, Grin++ Just Works™, but for those of you who live in the real world, where theory often doesn’t match up with reality, we’re always around to help in Telegram at https://t.me/GrinPP

Sorry about the long post, but thanks so much for the 3 of you that read the whole thing. Never forget that when You grinnin’, You winnin’

Have a jolly weekend!

This is amazing! Congrats on hitting v1.0.0! The wallet is so beautiful and packed with features!

Fun fact: this is the source of the You grinnin’, You winnin’ slogan!

Yep, and another fun fact: Half of my face is in that picture!

I noted your progress in telegram channel, I will note here too
good job, guys! ツ

Great job on the redesign and congrats on 1.0! Grin++ looks very nice now and is imo the nicest looking grin app/node at the moment. Keep it up!

How can I trust that your wallet is free of viruses and vulnerabilities?
Can the community check and confirm that this wallet is allowed to be used?
The design is good but not super, so you changed the official logo to some kind of smiley face, which is very bad.

https://grinplusplus.github.io/
I see you changed the logo that’s good, I would still change the font where the logo is, it seems strange

Love the redesign @davidtavarez , even more clear than the previous design which in my opinion was not bad at all @david. O and I really like the new Grin++ smily.

@Pirat, there was a security audit by https://smartdec.net/. A large part of the community has used Grin++, so far no one ever encountered exploits. So consideeing the community experiences so far together with the security audit, I think Grin++ is a safe choice to manage your Grin.

How can I trust that your wallet is free of viruses and vulnerabilities?

@Pirat The code is all open source, so if you want, you can even go through the hassle of building and packaging yourself. And as @Anynomous mentioned, it’s been security audited. But no wallet is completely free of vulnerabilities. CVE-2020-12439 was just announced a few days ago that affected both grin and grin++. But I took security seriously, and encourage everyone to review the code and report any issues to me.

O and I really like the new Grin++ smily.

Me too! I think it’s really awesome. We have @DuckAvenger to thank for that.

Great news! Can’t wait to try the new version. Any plans on bringing grin++ to mobile?

By the way, does anyone have experience with the Iron-belly mobile wallet. I am not sure if it is save and if it is still being developed?

By the way, does anyone have experience with the Iron-belly mobile wallet. I am not sure if it is save and if it is still being developed?

I have no information, but I can suggest you watch this video if it is not familiar to you yet
maybe you will learn something new for yourself 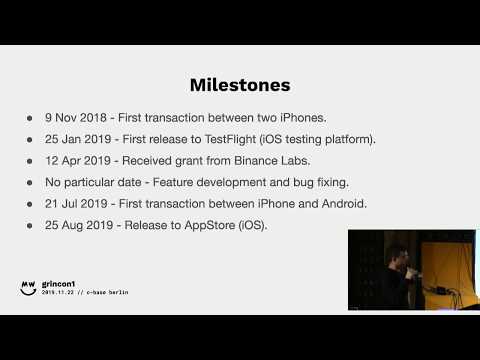 I also found wallet developer channel in telegram for you

I am not capable of reviewing the code, but Ivan seems like an awesome standup guy. I trust it and it is still being developed