A Draft Design of Mimblewimble on Nervos CKB

Dear everyone, my name is cipher, a member of privacy layer team at Nervos. Glad to share some interesting ideas about privacy on blockchain with you guys. Nervos has made a donation to the Grin Community to help the privacy research and implementation (A Message from Nervos). I believe we together could push on-chain privacy one more step further. Here I present a draft design about a Mimblewimble layer on Nervos, hope to hear your questions, suggestions, ideas, and any kinds of feedback!

Mimblewimble is a protocol to solve the privacy problem on blockchain. CKB is the layer 1 of Nervos Network, a public blockchain. This article gives a scheme to use the mimblewimble protocol on CKB, which users can use to trade CKB or UDT privately. This article also proposes an optional auditable wallet to meet the regulatory needs of user assets, which is an optional feature, users can decide whether their assets are regulated or not.

Nervos CKB is a general purpose UTXO based blockchain system. Every TXO here consists of four fields, capacity, data, type script, and lock script. We call the TXO a cell. The capacity field is the same as the amount field of Bitcoin TXO, it’s the amount of the Nervos native token CKBytes. Which also refers to the maximal size of a cell. The data field is used to store any user defined data, which may follow the rules defined by the lock or type script. And the script fields record some program pointer to Turing complete code to serve as on-chain verifier when transaction happens.

A Nervos CKB transaction is kind of more complicated than Bitcoin. It includes several input cells to destroy and several output cells to generate, besides, it requires witnesses with arbitrary data to provide the proof or authentication to unlock the lock script of inputs. The difference between type script and lock script is execution timing. When a cell exists on the input side to be destroyed, its lock script will be automatically loaded and run. And for every cell both on the two sides, its type script will be automatically loaded and run. The scripts execution will require some extra data in witness, such as signature, merkle tree path, and so on.

Below illustrates a real transaction on CKB: 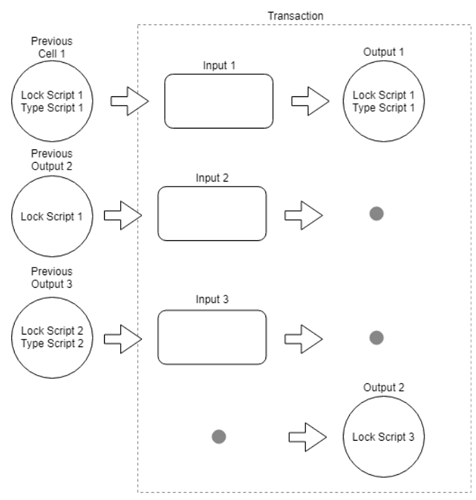 Type script and lock script share the same data structure. There are three fields in a script, including the code_hash, args, and hash_type. The code_hash could be regarded as the pointer to the RISC-V program binary, and the args could be regarded as the static arguments to run this program. We could safely ignore the hash_type field, which is trivial to the privacy layer design. 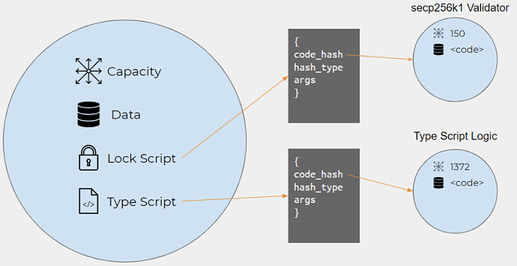 Let’s take the default lock script on CKB as an example, whose signature verifier is also called secp256k1_sighashall. Its code_hash points to an on-chan binary code, and its args are set to the cell owner’s pk_hash. When a cell is destroyed on the input side, the CKB-VM will load the secp256k1_sighashall verification code according to code_hash and execute it. By running the code, the VM will first hash the transaction raw data, and recover the signature public key with the hash result and the signature from the transaction witness. Finally, the VM will compare the hash of the recoveried public key with lock script args. The transaction will be appended to the new block if all the verifications pass. 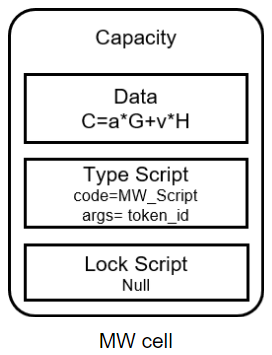 A MW cell is an imitator of the UTXO on Mimblewimble chain, like Grin and Beam. Its data field consists of the Pedersen Commitment of the token amount. Its Type Script constrains the cell’s behaviour. And its Lock Script is empty, so that no one could trace its owner by the Lock Script. Besides, an empty Lock Script leaves more space to the future private state channel network. 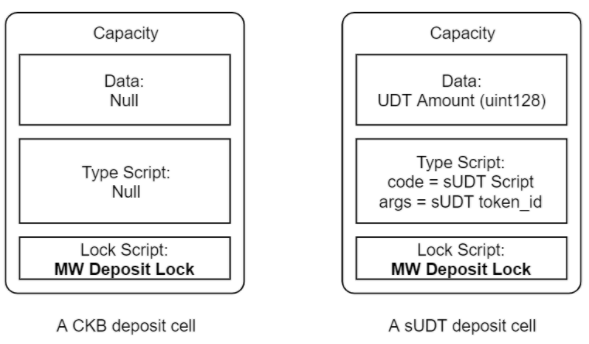 A deposit cell is a cell that stores the user’s asset when it goes from the transparent world to the mimblewimble world. The deposit cell has a special Lock Script, which verifies the proof from the withdrawer. Its verification logic changes slightly according to the different asset type,

A deposit transaction makes the transparent assets locked in a Deposit cell, and generates one or more MW cells. At least two MW cells in outputs are suggested to hide the MW cells’ balance.

Inputs field contains a UDT cell that is used to deposit assets of value v and provide mining fee by CKBytes. And in order to spend the input cells, the depositor must provide some witnesses to be verified by the Lock Script.

There are two kinds of witnesses:

The deposit transaction shifts the assets from the transparent world to the Mimblewimble world, so the outputs field consists of some MW cells to exchange in the Mimblewimble world, some UDT deposit cells to lock the corresponding assets in the transparent world, and some UDT cells to contain the remaining amount (we only show two MW cells, a UDT deposit cell and a UDT cell in the figure below).

In a MW cell, the Data field contains the commitment, the Type Script uses the witnesses to verify the cell, and the Lock Script is empty.

The UDT cell is the same as the one in the inputs field except that the amount is v-v’. 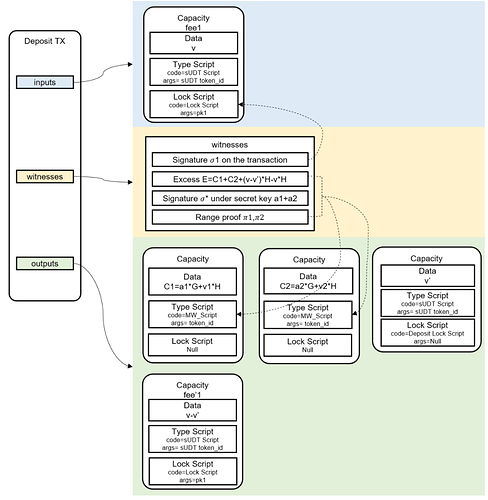 Figure. An example of a deposit transaction.

MW cells could be transferred in the same way as that on Grin and Beam. The sender has to interact with the receiver to generate a valid MW transaction. And multiple MW transactions can be merged into a single transaction to save storage and break the transaction linkability.

To initiate a private transaction, the sender and receiver have to prepare the signature and range proof for every output. All the necessary data should be included in the witness field. To make it easy to aggregate with each other, we have to design a flexible witness and verification data format.

To reduce the interactive round number, we use the scheme proposed in [FOS19]. In the scheme, the sender only needs to send a message to the receiver, who completes the final transaction. We show the process of generating a transfer transaction in the following figure.

Figure. The schematic of generating a transfer transaction.

image1079×529 115 KB
Figure. The schematic of generating a transfer transaction with an offset.

We present the structure of a transfer transaction through an example in the following figure. 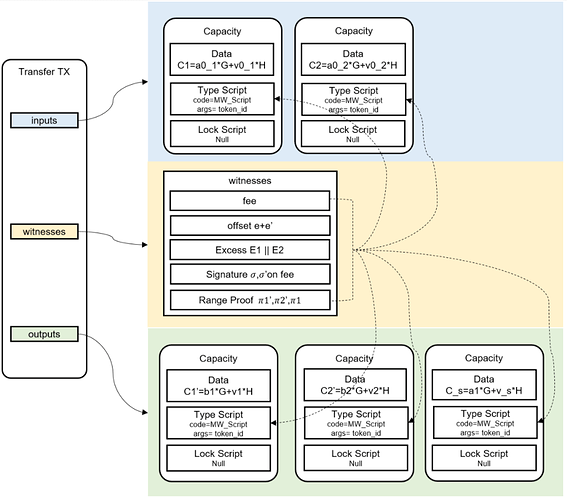 Figure. An example of a transfer transaction without CKBytes as a fee.

Inputs field contains two MW cells, and the sum v of the values committed in the two cells are larger than the value ρ that should be transferred.

Unlike in a deposit transaction, the witnesses here are used only in Type Scripts. The witnesses consist of two Excesses E1 and E2 (that are the verification keys of σ and σ’), two signatures σ and σ’, and three range proofs. The valid signatures under the two Excesses means that the input coins are spent by the owners who knows the secret keys and the transaction is balanced. And to prevent others from tampering with the fee in witnesses field, we take it as the message signed. The range proofs are to prove that the values committed in the output cells are in [0, v_max].

In each MW cell, the Data field contains the commitment, the Type Script uses the witnesses to verify the cell, and the Lock Script is empty. 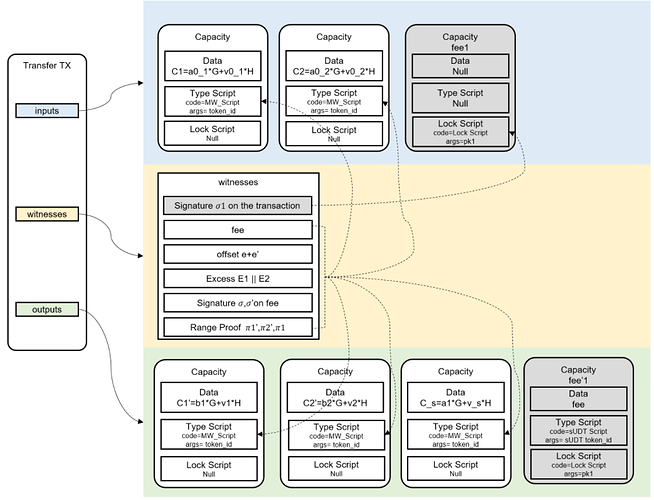 Figure. An example of a transfer transaction with CKBytes as a fee.

Without loss of generality, we give an example in the following figure, in which a portion of the amount in two MW cells are withdrawn as a UDT cell while the remaining amount exists in a MW cell, and only a UDT deposit cell is involved.

Inputs field contains two MW cells, a UDT deposit cell, and a CKB cell that is used to pay for the mining fee. We assume that the user wants to withdraw the UDT of value v, so the sum of values (v1+v2) committed in the input MW cells should be larger than v, and the amount x in the UDT deposit cell should also be larger than v.

Like in a deposit transaction, the witnesses here are used in Type Scripts and Lock Scripts. The signature σ is used to unlock the CKB cell, and the rest of witnesses are used in Type Scripts. The rest of witnesses consist of an Excess E (that is the verification key of σ*), a signature σ*, and a range proof. A valid signature σ* under the Excess E means that the input coins are spent by the owners who knows the secret keys and the transaction is balanced. The range proof is to prove that the values committed in the output MW cell are in [0, v_max].

There are four kinds of output cells: 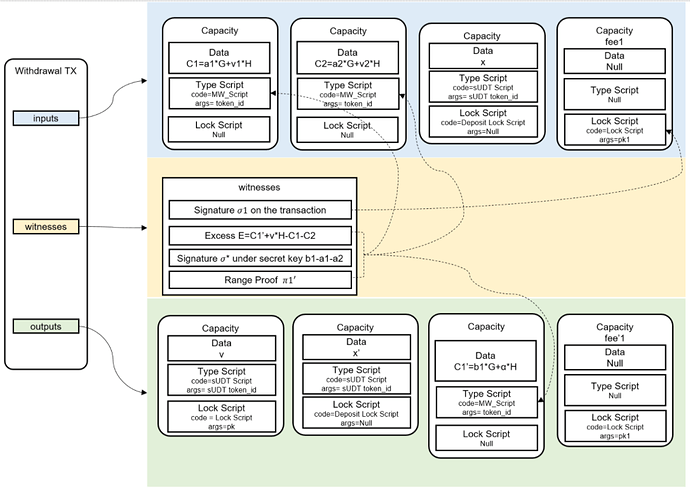 Figure. An example of a withdrawal transaction

To cut off the trails, any private transaction or withdrawal transaction should not involve transparent inputs, which means that MW cell or deposit cell should pay the transaction fee, and they have to reserve some CKBytes for future operations.

When a deposit cell exists in the inputs, it executes the withdrawal verification process, which consists of the following steps:

Note that the users could use the withdrawal operation to release or pay transaction fees.

The MW cell Type Script will automatically be executed to verify the MW consistency if a transaction includes a MW cell, no matter which side it exists, the input side or the output side.

The information provided by users to the auditor is mainly the amount of transactions and other information that needs to be provided according to the actual situation. Recall that the data in a MW cell is a commitment to a value v, which should be revealed to the auditor, but the blinding factor of the commitment cannot be known by the auditor, as it can be used to spend this MW cell. In order to guarantee that the user cannot reveal a fake value v’≠v, the user should provide a proof to convince the auditor that the revealed value is equal to the committed one. We use sigma protocol to generate the proof.

Sigma protocol is an efficient zero-knowledge proof, and we use it to prove that the prover knows the witness r such that r*G=D. We show the interactive version in the following figure. In practice, we need the user can generate his proof in a non-interactive way, so we apply Fiat-Shamir transform to realize a non-interactive sigma protocol. To be specific, the randomness e is not chosen by verifier, but is hash(a) that can be calculated directly by prover. Therefore, the proof π is <a||hash(a)||z>. 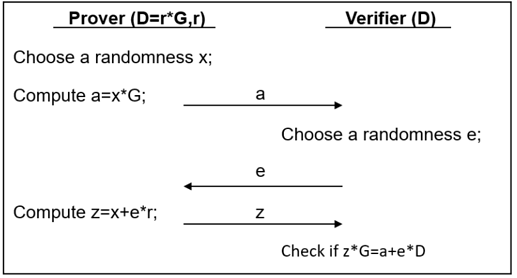 If all of the above items are verified, the auditor approves the value provided by the user.

This article presents a privacy scheme on CKB based on mimblewimble protocol. This scheme can be easily implemented with regulatory features. Users can do private transactions on CKB by using this scheme. However, there is room to improve the privacy of this scheme, for example, in the current scheme, the asset type is visible when users do private transactions. Next, we will improve this scheme by making it indistinguishable between assets to further improve the privacy of the scheme.

When airdrop for Grin community will start?