Yes, you can support all three, two, one or none. All vote combinations are allowed.

All three candidates for the 6th Community Council member have their post online now:

Candidates ;
@johndavies24
@Mokhtar
@Cobragrin
.
Check out their post and give your support/Like to the candidate(s) that best represents your vision for Grin as a project. Supporting multiple candidates is allowed. 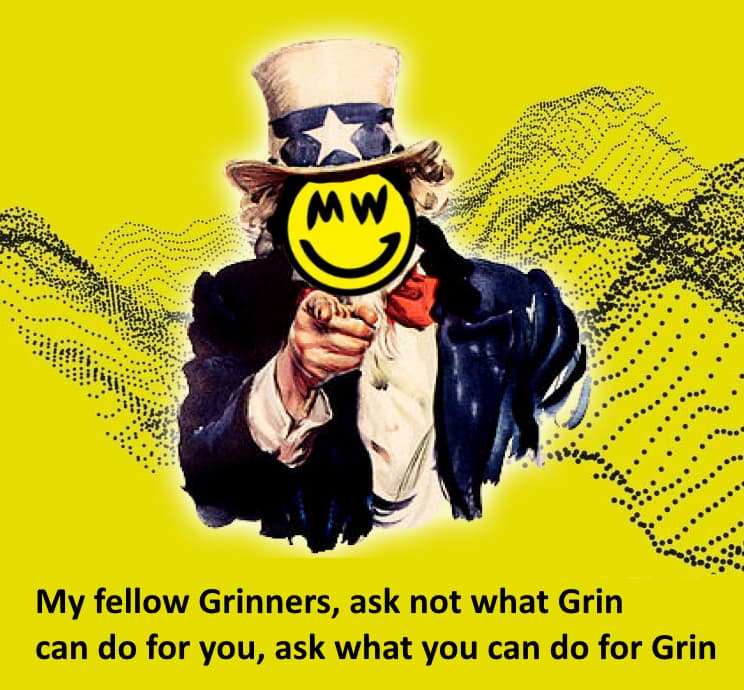 After discussing it with the other council members, we decided to move the voting deadline with two weeks, so Voting ends on Sunday the 15th of May! The reason is that there has been no newsletter with a link to vote for all three candidates since two of them submitted their candidacy just after the last newsletter was send. @NewJack777 In the next newsletter, can you put a link to this forum thread, the main message. I will update it with the new deadline and a link to al three candidates.

You can also buy müsli

The other two candidates are great. I withdraw my candidacy.

Are you sure, a lot of people are voting and supporting you?
Anyhow, plenty of ways to help Grin as project, both from within or outside of any counsil, so it is up to you to decide in which way you want to contribute.

This is bad news, what are your reasons?

Yes, I’m sure. Last election I was banned from the forum for saying something on keybase that an OC member had just said himself… My candidacy had to be posted by someone else. This time I follow all the rules and I’m ahead and now the voting period is extended. Whatever the reasons are for the extension doesn’t really matter, the current voting patterns still reveal that I’m a controversial candidate. I’d rather voluntarily not participate than bea controversial candidate when the other two candidates are great options.

You are so, so likely you would have won this election. It was a mistake on my side to set the deadline only 19 days after my initial post without waiting for candidates to put their candidacy online. Not having a single newsletter with a link to the candidates, well apart from yours since you were responsible enough to directly put your candidacy out

, is not really good for an unbiased vote.

You are indeed ‘a controversial member’. Controversy can however also be good thing, being controversial is often an indication that you are at the front-line of change. Your ideas and opinions are being listened to, no matter any ‘controversy’. This can for example be seen in the large scale buying of miners from the CC fund, which is used for both security and to build an income of Grin for the CC. This was first proposed by you:

This is not fully thought out so I am just throwing it out there to see what people think of this. Personally, I am happy the funds are kept in BTC, it was clearly a wiser move than converting it all to grin, but some in the community wish the fund was in grin. This made me think, since the fund has just exploded in value, why not build a decentralized mining network that would serve several purposes: Perpetual money printing machine, rather than solely rely on the funds we have and future d…

So whether it is from within or outside of the CC, keep voicing your opinion and ideas.

I’m also annoyed by the extension of the election. My first thought was that if one does not like the result, there are actually 3 ways to prevent it:

However how this went down i can understand your reasons perfectly and i am of the opinion that this extension was a dumb move.

. Hence I first discussed it with the other community council members. This is however also an unfortunate downside of @johndavies24 history. Automatically anything is perceived in relation to that history, which is not something I can prevent.

one extends the election period so long until one has the pleasing result.

Extending an election should not change the results of any unbiased election right? Hence, if an extension changes the results, it only would mean that the election was biased. It was still most likely that @johndavies24 would have won the election.
In any case I do respect his decisions and reasons for withdrawing even though I am a bit torn about it.

The number of votes was similar to last CC vote. Can’t really imagine the choice to extend was unbiased. This choice was also discussed in private and I want no part in such nonsense

The choice to extend was biased and made in private. Get out of here with this nonsense

Honestly, you guys change the rules the same day election was supposed to close. I think the CC conversation and voting on this subject should be made public

I very much doubt they’ve extended the voting period to go against you since you’re leading by a lot and the community doesn’t have enough active members to make someone else surpass you. I would also guess that you could probably get more easily new votes than the other candidates. So my guess is that there was nothing shady, just an honest mistake in when this was announced. Was the choice to extend it made in private? Yes, as it should be. Thinking that cc chats must be public makes no sense to me, what should be public is their decision and explanations and the decision was explained by @Anynomous. Sure, maybe they’ve made a mistake, but your reaction was not really exemplary either

Was the choice to extend it made in private? Yes, as it should be.

I would disagree with that. It is impossible and probably incorrect to try and prevent any private discussions within a council, but it is normal to expect a decision making process to be held publicly, to allow for the community to comment. That is a common feature across most forms of government and avoids situations exactly like this where the council members might find them surprised by how their actions are perceived.

Even though it didn’t strike me as malicious I could’ve told them an extension seemed silly and hand wringing, like it’s such a small community what are they worried the word hadn’t got out about the vote? Anyone who is remotely active here would’ve already seen all of the candidate posts.

Yeah, as I initially stated, the other two candidates are great. Clearly my views on transparency and optics wouldn’t align with the CC. That’s okay. I’m still going to run my nodes and do what I can for grin.

but it is normal to expect a decision making process to be held publicly, to allow for the community to comment

I think having such conversations public would only drain cc’s energy since there will always be someone who will disagree with their decision or flame someone’s choice of words, so the conversation would become less pleasant since you need to be very careful about what you say and how you say it. In my view cc is the same as the core team but with one difference that its members were voted by the community.