We believe that this endless waiting and embarrassing situation is not in the interests of Innosilicon’s customers, so we have to suspend this project and do our best to recover the investment for our customers.

We are now also willing to sell the complete design of the product to any interested third party, or support the third party to use other processes to ensure that this product can be mass-produced and run in the next year, to protect the interests of future Grin customers.

From now on, we will be the first to arrange a full refund for the first batch of customers who order directly from Innosilicon official channels, and complete the refund for all customers who booked within 30 working days in accordance with the payment order." 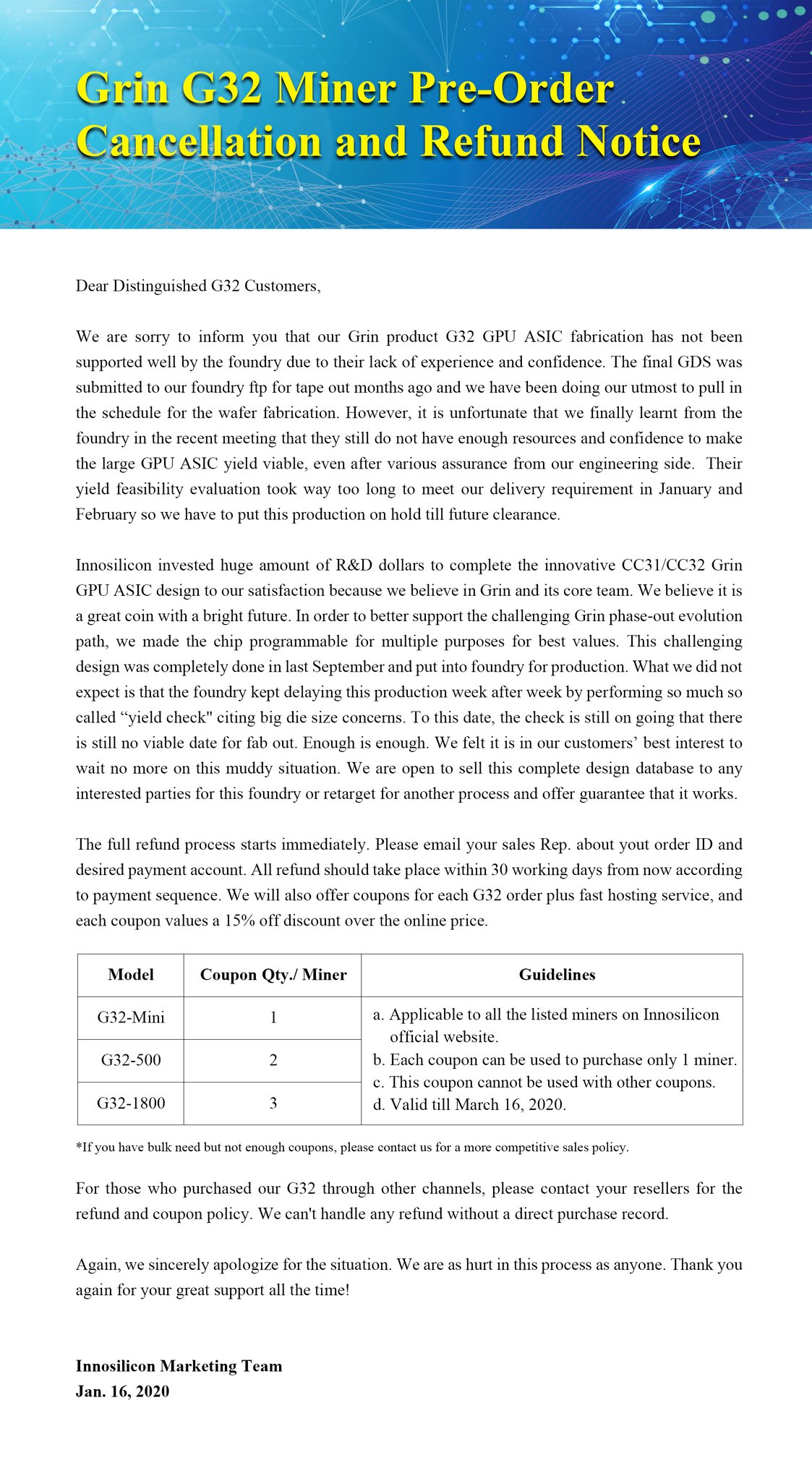 a new asic will come out soon in February.
stay tuned

Really? From which company? Do you have a source for this wonderful news?

I cannot find any reference to a Grin miner on their website. Do you have any proof of the release of such a product? It seems almost too good to be true. Bitmain and INNOSilicon have both scrapped their own plans for a G31/G32 ASIC, so I would expect that any other supplier would be leveraging that to boost their own profile if they truly had such plans.

yes we are one of the investor for this grin miner. it’s testing now.

Your manufacturer and it’s foundry must be testing 1 prototype. I’ve been mining Grin since before the genesis block was found on January 15th, 2019 to now, yet today was a new record for Grin earnings (in Grin coins, not USD, pool being Grinmint, 85 blocks found today). Sure feels like Grin is free of ASICs. https://grin.blockscan.com/chart/type/hashrate

the asic suppose to come out next month, let’s see if the manufacturer can delivery it on time.

the asic suppose to come out next month, let’s see if the manufacturer can delivery it on time

I seriously doubt if Micro’s ASIC will ship next month. I will cite the following reasons:

Your manufacturer and it’s foundry must be testing 1 prototype.

Neo-Geo, see my answer to @keepwalking1234 above.

You are correct that prototypes need to be tested and assuming that they are a single chip design, extra testing needs to be done. For February production, parts need to be ordered by mid-November which means C32 activity would be visible in October and November.

That was the reason that people familiar with ASIC production were confident that either Inno or Micro were testing prototypes and at least 3 months away from production.

Of course one can reduce cycle time by ordering risk wafers but those could be expensive saucer plates if the chip doesn’t work.

With a chip as complex as C32, it is unlikely that a team inexperienced with large digital ASIC would get it right the first time. So that would lead to ECOs and metal mask changes adding another 2 months. There aren’t many teams in the world with experience designing 600 mm2 chips and sophisticated memory controllers. And most of those designers come from AMD and Nvidia.

testing the single chip now, single chip C31 is about 4.8-5 GPS, one miner will have like 100 chips. so the GPS for C31 is 480-500 GPS. but you are right, we need finish the testing first before the asic come out. the testing should be finished by early of February. all the others is ready to build.

Are there any C32 results?

Has anyone received their refund yet?

Just heard back from Innosilicon and learned that the refunds have been delayed due to quarantine restrictions related to the Coronavirus. These restrictions are in place until 21 Feb 2020 and they will then begin processing the refunds.

is it really that profitable ?

I think maybe some store might have some stock if some people received these miners, just need to find those stores

There’s zero evidence that anyone received a Grin ASIC. Usually ASICs cause the network hashrate to increase dramatically, to the point that it’s no longer profitable for GPU miners. And yet the reality is that Grin’s net hash has been steadily decreasing, we’re now at the lowest point in over half a year: https://grin.blockscan.com/chart/type/hashrate

In fact, today was the most Grin coins I’ve mined on record, and I’ve been pointed to Grin since January 15th, 2019. I keep experiencing new record highs of Grin coins mined. Others Grin miners should be experiencing the same phenomenon. More coins mined because the hashrate keeps decreasing. Grin is also ranked the most profitable coin to mine for some time now, and often stays within the top 5 most profitable for whattomine.